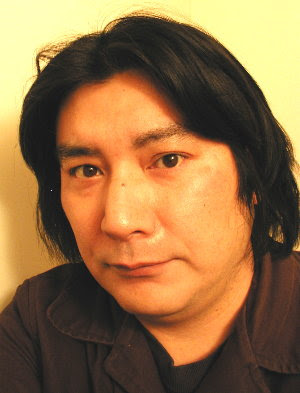 Occupation: non-fiction writer, editor
Birth: 1965 (male)
Nationality: Japanese
Living in: Chiba (Prefecture next to Tokyo)
Academic background: Waseda University (dropped out)
Business career: copywriter (1987-1990)
1990: Started to write on magazines (non-fiction about modern teenagers)
1995-1996: Worked as a party organizer in Tokyo Club scene
Also started to research why teenagers stop prostitution when they star slitting their wrists.
Learned many facts in the relation of abuse and addiction.
1997: Published “100 Letters from Abused Persons to their Parents”.
Also, joined the editors in publishing “Alt-culture Japan”
(to select and explain modern Japanese words).
1998: Discussed with Ryu Murakami (@1) about the relationship
between children and their parents in modern Japan.
1999: Published “The Complete Manual of Independence from Parents”.
The original word “Petit-iede” (@2) I created in this book has become
a popular term and phenomena in Japan.
And I've been asked to lecture on underground youth culture at universities,
the boards of education, and P.T.A. groups.
Also appeared on the TV program "Pornography : The Secret History Of Civilization " created by Channel 4 in UK.
2000: Published “Changing Families in Japan”.
In this book, I discussed with Shinji Miyadai (@3) and Randy Taguchi (@4)
on independence of modern parents.
2002: Wrote an article about reasons of wrist-cutting in the magazine
“Teenager under Correction” (published by The Ministry of Justice).
2003: Published “The letters to Sakakibara Seito”
Sakakibara Seito was a 14 years old boy who killed 3 children in 1997.
Though he shocked the nation by his acts, he lives free today according to,
and protected by the Japanese juvenile law.
This book contains 31 letters that famous writers, young writers
(the same age as Sakakibara Seito), and letters which the bereaved family wrote.
2004: Published “Let's Stay in Share-houses in Japan!”.

2005: Published "When adults break their children "
2006: Published "The Salvation called the FREEDOM TO DIE -- Net Group Suicide and Psychiatry "
Also,cooperated with coverage about net group suicide to an American journalist David Samuels.
Samuels wrote the text like slightly out of focus in The Atlantic Monthly.
Commented on The NewYorkTmes (14th ,May) about cyber cafe in Tokyo.
2007: Published "NEO N.E.E.T in Japan --a new generation who earn money more than their parents ".
They're good at using internet.
And published "Pride Work --The way to work to make yourself".
Started to teach about alternative culture in the University of Tokyo(independent colloquim).
Also,cooperated with coverage about HIKIKOMORI&OTAKU to an American author Joshua Wolf Shenk.
2008:Talked with Nana Watanabe in Nikkei BP net.
Nana Watanabe is a photographer and author of “Changemakers”(Nikkei BP publishing) that has maked Japanese youth interested in social entrepreneur.
Also,published ”Learn social entrepreneur!”(ASCII Shinsho)
and donated 10% of the copyright royalties to NPO etic. that has educated young social entrepreneurs.
In July, planned and managed. "Social Entrepreneurship Summit 2008” at the Okuma Auditorium, Waseda University.
In November, cooperated to studio360 (American radio studio) that research modern culture in Japanese.
2009:Planned and supported manage of "Social Entrepreneurship Summit 2009" in more than half of Japan's local governments with email and skype only.
And interviewed from Pedalfarbooks.
In December,published “Stolen libido in Japanese youth ”(Mainichi Shinbun)
2010:Released "web links of social entrepreneurs in Japan".;the first attempt in my country.
Interviewed from Shinbunka that is a newspaper for publishers in Japan.
2011: Helped people affected by the Earthquake Disaster in Eastern Japan.

2012:Cooperated in interviews for the comic "Yamikin-Ushijimakun" and "I am a Hero".
Published "3.11 of Children who will not forget the Earthquake Disaster".
Organized social ventures as teachers and provided their lecture.

2014:Talked with Kaori Sakagami who directed the movie "Talk back" in USA.
This movie is documentary that she shoot the women who were in prison or HIV.

2015:Published "How to change the world:social design from the 14-year-old"

2016:Lecture about social design asked by Kyoto Prefecture.
Published "The Cats and The beatles".
Lecture about the way to survival in modern Japan.

2017:Started "100 Projects to stop child abuse".
Published “100 Letters from Abused Persons to their Parents;Why don't you throw your parents away?” by cloud funding.
Lecture about child abuse for free in 19 areas invited by common people.

2018:Lecture about child abuse in 11 areas invited by common people.

＠1: Ryu Murakami is one of the most popular novelists in Japan and an Akutagawa Prize winner.
His novels have been translated in America and Europe and made into films by Japanese directors
and himself.
Our discussion can be read in the book named “Saizensen” (in Japanese).
＠2: Petit-iede means teenagers who left home and wander from one e-pal's room to another
without seeking a job, a place of their own to live, or a plan to be independent, and also
the phenomena itself. This word I created is known to all Japanese today.
＠3: Shinji Miyadai is one of the most famous sociologists in Japan.
His theme of fieldwork is how we can live easily in modern society.
He has been researching how young people (including married women) use telephone-clubs,
mobile phones and internet, how the market created the sub-culture to young people,
and how sex changed body and soul of people today.
＠4: Randy Taguchi is a new-generation novelist.
As she was writing columns in e-mail magazine and had more than 100,000 readers,
she's become a bestseller author.